Your test system for the detection of M. tuberculosis complex and differentiation of 27 clinically relevant NTM from cultivated material

The members of M. tuberculosis complex are considered to cause tuberculosis. In contrast, the group of nontuberculous mycobacteria (NTM) comprises numerous species that are mostly less pathogenic. However, there are some NTM that can cause certain diseases. Thus, the differentiation of tuberculosis TB pathogens and NTM plays an important role for diagnostics, treatment and prevention.

NTM are found in different environmental compartments such as soil and drinking water or in food, like cheese and pasteurised milk. Some NTM can cause nontuberculous mycobacteriosis particularly in immunocompromised patients (e.g. HIV patients) and thus gain clinical significance.

There is no current therapeutic standard for nontuberculous mycobacteriosis. The treatment is chosen according to the respective mycobacteria species. Consequently, reliable differentiation between clinically relevant NTM species is important for the therapy regimen. 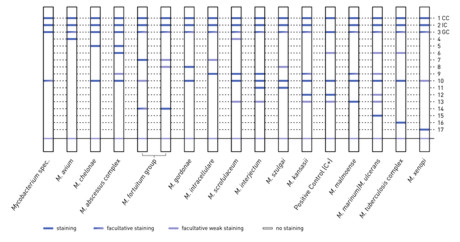 Your benefits with GenoType Mycobacterium CM

At a glance
Molecular genetic assay for identification and differentiation of M. tuberculosis complex and 27 clinically relevant NTM