GenoType MTBDRsl VER 1.0 and VER 2.0 - Your Important Assistance for Detetion of XDR-TB

Identification of the M. tuberculosis complex and its resistance to fluoroquinolones, aminoglycosides/cyclic peptides (and ethambutol)

The emergence and spread of multidrug-resistant tuberculosis (MDR-TB) and extensively drug-resistant tuberculosis (XDR-TB) are a major medical and public problem threatening the global health.
MDR-TB is defined as TB that is resistant to the two first-line anti-TB drugs rifampicin and isoniazid. XDR-TB strains are in addition resistant to fluoroquinolones and injectable second-line drugs. XDR-TB emerges through mismanagement of MDR-TB treatment.
Conventional methods for mycobacteria culture and drug susceptibility testing are slow and elaborate, requiring sequential procedures for the diagnosis. During this time patients may be treated inappropriately, drug resistant strains may continue to spread, and amplification of resistance may occur. Therefore rapid diagnosis and identification of MDR-TB or XDR-TB strains are prerequisites for the worldwide fight against TB. 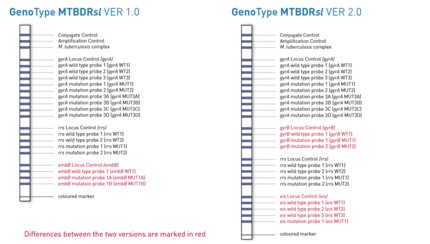 Your benefits with GenoType MTBDRsl

At a glance
Molecular genetic assay for identification of resistance to fluoroquinolones, aminoglycosides/cyclic peptides (and ethambutol) of Mycobacterium tuberculosis complex