According to the National Reference Centre for Helicobacter pylori, approximately 20-30 million people in Germany currently suffer from a Helicobacter infection that requires treatment. In most of these illnesses, initial eradication treatment is successful. Since, however, this initial therapy fails in about 10% of treated patients, it is consequently estimated that there are about half a million people who experience treatment failure!
Because of such failed treatments, the rate of resistance to first-line antibiotics increases. This rate is over 80% for clarithromycin in a patient who has already had several treatments. Consequently alternative antibiotics must be resorted to, for example, from the fluoroquinolone group. But even here, there are already initial resistances in the case of H. pylori. Thus, according to the recommendations of the National Reference Centre for Helicobacter, a biopsy to test resistances should be taken no later than after the first failed treatment, in order to find the best antibiotic combination for the patient.

A very rapid and simple option to detect H. pylori and its resistances is our GenoType HelicoDR. With this molecular genetic test system, the presence of H. pylori and resistances to fluoroquinolones and clarithromycin are simultaneously detected in a single step. Biopsy material itself as well as culture material extracted from it can be used as the starting material. 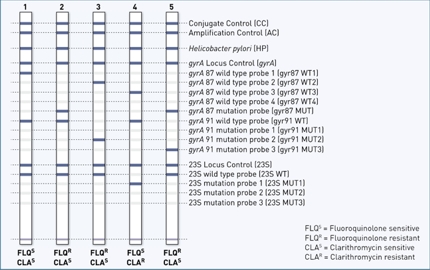 Your benefits with GenoType HelicoDR

DNA Isolation:
from biopsy material for example with QIAamp DNA Mini Kit (Qiagen). From culture samples with a quick protocol for isolation of DNA from bacteria (protocol available from Hain Lifescience)